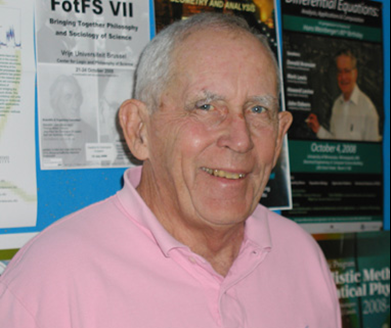 It is with great sadness that we announce the passing of our colleague Professor Emeritus Donald Babbitt on October 10, 2020 at the age of 84.

A short obituary was written by our colleague, Don Blasius:

Donald (Don) Babbitt received his PhD in 1962 from the University in Michigan and then right away joined our Department as an Assistant Professor.  He was promoted steadily, becoming Professor in the early 1970s.  During his time at UCLA he served the Department as Graduate Vice Chair. From 1979 to 1985 he was  Managing Editor of the Pacific Journal of Mathematics, which was founded at UCLA.

For the first two decades of his career, he worked in Mathematical Physics. Then, in the early 1980s he began a decade-long collaboration with UCLA colleague V.S. (Raja) Varadarajan on the classification, up to meromorphic equivalence, of meromorphic differential equations. This is a problem going back to Poincaré and they obtained many new results. At some point in the collaboration, Deligne took an interest. He suggested an approach using the methods of contemporary algebraic geometry. This  resulted in a recasting of the theory and enabled them to show that the local meromorphic equivalence classes form an analytic space.

Don left UCLA after 32 years  in 1992 to work for the AMS. He was Executive Editor for Mathematical Reviews from 1992 to 1994. According to an article published in AMS Notices in April 2002, on the occasion of his retirement, one of his last acts as Executive Director  was to “call upon the staff to create a Web prototype” of Math Reviews. The resulting product became MathSciNet,  released in 1996.  Babbitt was Publisher of the AMS from 1994 to 2002. During this period he built up the AMS’s book program, introducing  the Graduate Studies in Mathematics and the Student Mathematical Library.

After leaving the AMS, Babbitt returned to Southern California, settling in Pasadena. His intellectual interests turned to the history of mathematics and he wrote three articles on the Italian algebraic geometers Castelnuovo, Enriques, and Severi. His last article, published in 2013,  was on E.T. Bell and mathematics at Caltech between the two world wars.   Donald Babbitt is survived by his wife Berit and his son Donald, a UCLA graduate,  who is a renowned throwing coach at the University of Georgia.