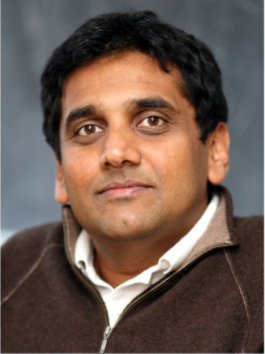 UCLA Mathematics Professor Chandrashekhar Khare has been awarded the 2021 fellowship from the Simons Foundation.

“Khare, a fellow of Britain’s Royal Society, is an expert on Galois representations and modular forms. He and the late French mathematician Jean-Pierre Wintenberger proved a conjecture that was widely considered unachievable. Khare and Wintenberger were awarded the 2011 Frank Nelson Cole Prize in Number Theory by the American Mathematical Society for their proof of Fields Medalist Jean-Pierre Serre’s modularity conjecture. The conjecture was first proposed in 1973 by Serre and has had an important impact in number theory. In 2004, Khare and Wintenberger astonished the mathematical community when they found a remarkable strategy for Serre’s conjecture.

The Simons Foundation fellowships enable outstanding scientists to focus solely on research for a year.”

UCLA Mathematics Assistant Professor Pavel Galashin was awarded the 2021 Sloan Research Fellowship today. Four UCLA professors were selected among 128 scientists and scholars from 58 colleges and universities in the United States and Canada.

“Galashin conducts research in algebraic combinatorics. He is particularly interested in its unexpected applications to other areas of math and physics, such as magnetism, knot theory and the physics of scattering amplitudes. He earned his Ph.D. from the Massachusetts Institute of Technology and recently received a National Science Foundation CAREER Award.

Winners of Sloan Research Fellowships receive a two-year, $75,000 award to support their research. The fellowships are intended to enhance the careers of exceptional young scientists and scholars in chemistry, computer science, economics, mathematics, computational and evolutionary molecular biology, neuroscience, earth science and physics. The philanthropic, New York–based foundation was established in 1934.”